Other treatment's for achalasia include laparoscopic Hellers myotomy, pneumatic dilation, and botulinum injection. Please see below for a more detailed summary.

With the Laparoscopic Hellers myotomy 4-5 small incisions are made in the skin and allowing access to the abdominal organs. These incisions function as ports for various instruments. The esophagus and stomach are identified and are separated from the surrounding connective tissue. Once the esophagus has been adequately freed up, approximately 6-8cm of the esophageal muscle is cut extending down to 2-3cm to the stomach. Due to the disruption of the natural connections with the esophagus and surrounding structures there is a high rate of reflux and an antireflux procedure is required.  Specifically, the stomach is partially wrapped around  the esophagus and sown into place to reinforce the natural barrier to reflux. 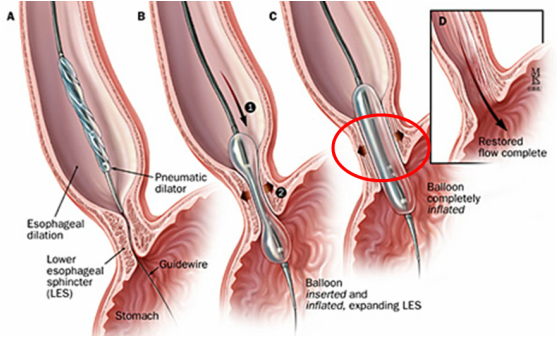 For many years, repeated endoscopic pneumatic dilation was the treatment of choice, due to the the fact that the procedure is quick and easy to perform. In 2011,  a trial published in the New England Journal of Medicine comparing pneumatic dilation to Laparscopic Hellers Myotomy. They found that after 2 years follow-up there was no difference in success rates between the two treatments, both achieving success of over 85%. With a perforation rate of 4% for pneumatic dilation and tears in the mucosa in 12% of Heller myotomy patients.

The pneumatic dilation procedure is generally as follows (see figure below):
◦ An endoscopy of the upper GI tract is performed.
◦ A balloon is inserted over a guide wire and positioned across the junction of the esophgus ad stomach
◦ Under X-ray, the balloon is inflated until the tight area at the junction is "opened up" 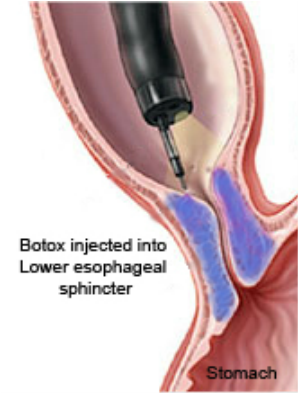 Using an Usually 100 units of Botox is injected with a in 4 divided doses into the four quadrants of the lower esophageal sphincter, under direct vision. It is a safe procedure, with very few side effects or complications. The efficacy is approximately  about 85% in the short-term, however, this decreases to 50% at six months and 30% after one year. In addition, repeat injections are generally  less effective. Due to the poor long-term efficacy this treatment if is generally reserved for patients that are too unwell to undergo any of the other procedures.